Repression stepping up for Olympic Resistance

I was sent this press release a couple of days ago by Wes, a friend of ours in Salt Lake City.  He has been involved in independent media documentation of US anti-imperialist social movements for a while, and as a result Homeland Security has decided to pick on him (this is a pattern that has developed over the last few months as the Canadian and US governments try to suppress the Olympic Resistance movement centering around the Vancouver Olympics this month.  People are resisting the Vancouver Olympics because they are being held on stolen native land, they displace homeless residents in the city, the greenwashing that has covered up considerable environmental destruction, and a long list of other negative effects that the Olympics have on local communities.  Click here to learn more about Olympic Resistance.

Here is the press release:

U.S. journalist John Weston Osburn was detained by homeland security on his way back in to the States after being twice denied by Canadian Border Officials on his way into Canada to cover protests at the 2010 Olympics. While in the area between border posts, Osburn was told that he was in a “no mans land,” and was denied the right to speak with a lawyer.

“I repeatedly told the officers that my rights were being violated and that I wished to be released. I felt humiliated, powerless and have rarely felt so unprotected,” said Osburn.

“The supervising officer made reference to making sure i had no weapons of mass destruction and that I wasn’t a terrorist, when it was obvious i have nothing to do with those things. This was all after i was thoroughly questioned and searched on the canadian side which was two hundred yards away at most,” he said.

Osburn travelled 2000 miles to Vancouver from Salt Lake City, Utah, with the aim of documenting protests to the 2010 Olympics. He has worked with Indymedia and the Glass Bead Collective in the US. 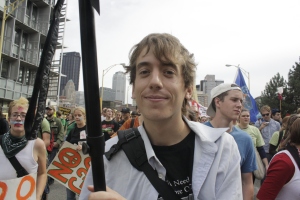 if you need to contact Osburn he can be reached by email at westonslc@gmail.com or by phone at 801-979-3091. The photo attached is of Osburn filming at the g20 protests in pittsburgh 2009. Photo taken by Lauren McChesney.

Haiti: The Politics of Rebuilding »
« Climate of Change Conference this weekend in SLC

15 thoughts on “Repression stepping up for Olympic Resistance”