The Coalition of Immokalee Workers and Inspiration

posted simultaneously at sfablog.org, the blog for the Student-Farmworker Alliance 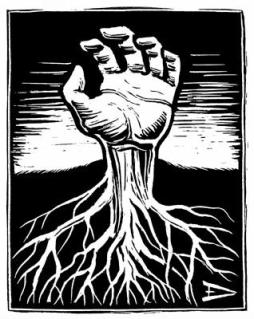 My years of involvement in the Campaign for Fair Food have involved an increasing appreciation for the ground beneath our feet. I mean ‘ground’ in the obvious sense, of course –the pasture clay that Tennessee farmworkers dig out of their boot-treads; the sandy soils from which tomato plants vine up towards the sky and towards farmworkers’ calloused hands in Southwest Florida. But I also mean ‘ground’ as our most valuable metaphor: the grounded-ness of our ‘grassroots’ organizing, our ‘rhizomatic’ activist networks, our ‘radically’-rooted analyses and strategies for change. We talk about ground in order to say that something is almost hyper-real, and that’s the kind of ground I think a Fort Meyers-based attorney for the Department of Justice was invoking when he called Immokalee “ground zero” for modern-day slavery. We do it, too, when as members of the Student Farmworker Alliance we instinctively refer to our full-time staff as being organizers “on the ground” in their Immokalee office.

Earthy metaphors fit in part because of the Coalition of Immokalee Workers‘ organizing strategy –methodical, gradual, transformative, long-haul. It’s biological, it persists and grows tenaciously This is a revolution, but it looks a lot more like the growth of a pecan grove or the slow, settling-in of a mangrove swamp than it looks like the flash of a Molotov cocktail. For those of us giddy over the volatile energy of barricaded Tahrir and Zucotti and Syntagma Squares in Cairo and New York and Athens, the movement of the CIW can seem almost geological in comparison. The reforms we are seeing in Florida agriculture have taken time and will continue to, but they will be solid and lasting like continental drift, pulling the earth inexorably along.

Earlier this week, I was walking across Guatemala City’s central park, and found myself standing on a black-and-white image of a student activist who had been killed by the police 3 decades before. I had run into the yearly commemoration of the victims of the country’s 36-year civil war, in which over 250,000 people were killed by the army. Young activists from the “HIJOS” (childen) collective, descendants of those killed and disappeared during the war, were painting an enormous mural on the plaza directly in front of the presidential palace and wheatpasting portraits of the disappeared below it with a gigantic caption: “Justice for Genocide Now!” It’s a bold demand, since the man who now occupies the presidential palace is widely acknowledged to be one of the architects of the genocide in the department of K’iche’ while he was director of military intelligence in 1982. But it’s also a demand that seems possible, after former dictator Efraín Rios Montt was put under house arrest for the belated investigation into his war crimes last month. So these children of the disappeared paste the images to the plaza, so that government functionaries will have to walk over them on their way into work each day.

I was in Immokalee on the day Rios Montt was arrested, and the CIW office was abuzz with discussion between Guatemalan farmworkers, many of whom come from areas that were targeted by the army’s “scorched earth” policies 30 years ago – would it just be a show, like all of the previous attempts to prosecute the military, or would it be real this time? 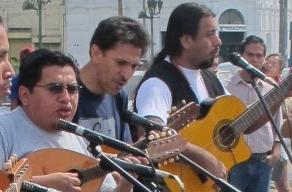 Now, standing in front of the palace, things came full circle. The Estudiantina, a revolutionary folk music group from the university, was playing for the commemoration, and I ran into one of the guitarists afterwards. His CIW shirt matched my CIW cap, and he yelled to his fellow musicians- “hey, this guy is with the Coalition!” Some of the other students rushed over to talk about the CIW, and wish the farmworkers success in the upcoming fast for the Publix campaign. Some of them had been to Immokalee themselves, it turns out, and now, as they stood on the plaza in Guatemala City in front of the palace of a war criminal, they wanted to talk about la lucha – and they meant the Campaign for Fair Food.

In Guatemala, where I work with peasant unions engaged in a life-or-death struggle for land reform, I often tell Guatemalan activists stories of the CIW: the campaigns for fair food, the pennies-per-pound, the David-and-Goliath confrontations with Burger King and Publix. Almost always, they are astonished. Many of those activists are familiar with working in the US;

many have made the crossing at some point themselves, and everyone has a family member washing dishes in Queens or picking tobacco in North Carolina or landscaping the mini-mansions of the rich in Orange County. They tell me, “I thought everyone just hid and kept quiet up there!” They listen to the stories of U-haul trailers and slaves in shackles, and nod with recognition: many of their own parents were born as serfs (colonos) on the piedmont coffee plantations of Guatemala’s southwest coast. The thought of their compatriots in Immokalee successfully bucking the bosses off their backs, even in the land of ICE and Joe Arpaio, elicits a smile, a soft, hopeful venceremos.

In Nashville, I have spent the last two years volunteering with a scrappy grassroots outfit called the Workers’ Dignity Project, which has grown from an idea and a handful of visionaries to a base organization of dozens of low-wage immigrant workers supporting each other in the fight to end our city’s wage theft epidemic. Workers’ Dignity is well on its way to becoming a full-fledged workers’ center, and becoming a powerful force of solidarity in the struggle for a living wage and racial justice in the middle South. All along t

he way, the CIW accompanied that growth. The CIW came through Nashville with their Modern-Day Slavery Museum last year, and met with the Workers’ Dignity membership for two days of collaboration and strategy discussion. Not long after, a group of immigrant workers and allies went down to Florida to join the “Do the Right Thing” march on four Publix supermarkets in Tampa. I will never forget my friend Juan’s face glowing as he saw the marches converge together and the chants of “si se puede” magnified, as he led the column with his Workers’ Dignity banner. He was still smiling as he looked out the van window on our way back to Nashville. I asked him what he was thinking about, and he said, “I had no idea that there were so many white people, black people, citizens of this country, that supported our cause.” There had been dozens of church congregations, student groups, labor unions, and families out that day, a testament to the transformative power of the social alliances that Florida farmworkers have been nurturing for two decades.

Now that Workers’ Dignity is taking root, we stand in solidarity with the CIW that showed solidarity to us. Publix is expanding in our state, hoping to construct dozens of new family-friendly supermarkets in a growing market. We will be there to hold them to the advice that their founder George Jenkins gave to his grandson Ed Crenshaw, the current CEO of Publix: “don’t let making a profit stand in the way of doing the right thing.”

One thought on “The Coalition of Immokalee Workers and Inspiration”