Campesinos Refusing To Disappear: Guatemala’s Polochic Valley One Year After the Evictions

by Tristan Call. Posted Simultaneously at Upside Down World

Juan with his daughter at the former site of the village of Parana. Photo by Stacey Irvin

Juan lived in the village of Paraná until August, when for the second time in six months the private security forces of an international sugar company reduced his home to ashes and tilled his crops under to plant sugarcane. Now he lives across the road from Paraná, a short walk that took us just a few minutes. Where he lived and farmed corn with dozens of other families just a few months ago, there is now an unbroken expanse of tightly-planted rows of sugarcane. Where he lives now, the houses are temporary, crowded, cobbled together with sticks and plastic sheeting. He shows us the one-room house he shares with his displaced wife and children; he shows us the cacao residue they add to hot water and drink in the mornings instead of coffee. They drink it without sweetener, he explains apologetically, because they can’t afford to buy the bags of sugar. 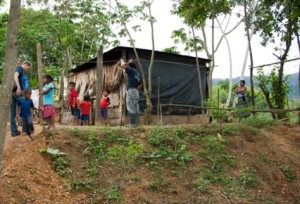 Juan's shack where he lives with his family. Photo by Stacey Irvin

The Polochic Valley is now full of farmers, surrounded by a sea of sugarcane, who can’t afford to feed their children sugar. This snapshot is a telling example of what hunger and poverty look like today –according to the FAO three-fourths of the people who experience food insecurity live in rural farming areas –and the most recent round of dispossession in the Polochic dramatically illustrates the larger pattern of how small farmers become landless laborers.

Resistance to land theft is something of a family tradition in the Polochic. Some of the old-timers still remember their parents’ stories of the 19th-century colonization of highland Alta Verapaz by German and American coffee planters. They pushed the indigenous Q’eqchi’ population from their lands, leaving many land-poor Q’eqchi’ to seek new homes in the Polochic lowlands. The oldest campesinos there were children when President Arbenz’s 18-month attempt at agrarian reform was cut short by a CIA-backed coup. The valley is still haunted by memories of the popular movement of the 1970’s that culminated in the infamous massacre of Panzós, during which over a hundred Q’eqchi’ campesinos were killed by the army as they agitated for legal recognition of their land titles. The children of today – those that survive the 3rd-highest child mortality rate in the hemisphere – will grow up remembering March of 2011, when 3,000 indigenous farmers in 14 communities were violently evicted by a combination of private mercenaries, army troops, and federal police.

When we visited and wrote about the Polochic crisis in August of last year, we found not only death threats and paramilitary murders of local activists, but also a more quiet but equally devastating assault wearing down those evicted communities: a food price crisis of unprecedented proportions, forcing the displaced families to buy basic grains at sky-high prices because their crops had been destroyed just weeks before harvest. The government swore that it would comply with the Interamerican Court of Human Rights’ (IACHR) June 20th rebuke by delivering emergency food aid and shelter, a claim that at the time ended up being rather spectacularly false. 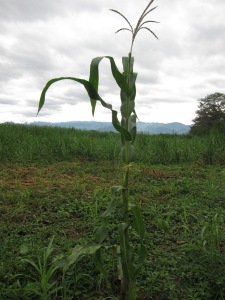 A shoot of maize grows where Parana used to be - now only cane remains. Photo by Mark Romeril

We returned to the valley on the first anniversary of the March evictions, visiting the same communities and families we had met in August. The displaced communities had always said that food aid was necessary but not sufficient – that the only way to end their hunger would be to guarantee their right to farm their own land unmolested. As one man in Paraná told us last week: “we don’t want sugarcane here, we want corn, livestock, pigs, and things we can eat.”

Still, peasant organizations brought international scrutiny to the Guatemalan government’s promise to provide food aid, documenting the state’s failure to comply with even its own, partial, commitments. We were told by displaced families who had sent two of their own up to a series of negotiations and IACHR hearings in Washington, DC in October and November that the government had finally committed to begin delivering food aid to the displaced. In the end, though, the quantity of food the government offered in its “monthly” food aid packages was laughable – an amount that locals reported would last them only two or three days per family, depending on how many children.

Apparently even that commitment, though, was short-lived. Displaced families from several of the 14 evicted communities told us that food arrived in January, but when it was supposed to arrive on February 27th, there was no aid. They said that government officials that notified them the food wouldn’t be coming had dismissed even the farmers’ existence, using that as the excuse to cut off the promised corn, beans, and oil: “there are no displaced people sheltering here, so no food aid is necessary!”

This approach is reminiscent of that taken by the Colom administration back in July, when the country’s widest distribution newspaper, Prensa Libre, quoted a government spokesperson saying that the reason that they haven’t complied with the Interamerican Court of Human Rights’ ruling was that they “haven’t managed to identify the communities” that were evicted. In my prior article, I refer to that approach, saying that the “internal incompetence and contradictions of the government took an almost comic turn.” But the pattern is becoming clearer with time. This is not incompetence; this is a long-term public relations strategy every eight-year-old would recognize: if you break something, sweep it under the rug and pretend it doesn’t exist. The Otto Perez Molina administration appears to be following the same strategy, hoping to turn the evictions of the Colom era into a full-fledged disappearance.

This is an old enough tactic –during the genocidal war of the 1980’s in which General Otto Perez Molina played a major part, the military regime would regularly simply disappear its opponents rather than try or face them in public. This may seem like a cheap comparison, so let’s walk through it to be clear what this new kind of disappearance looks like

The irony of this approach, of course, is that it requires us to believe that the state has simply shut off its surveillance apparatus, now that it suits them to simply pretend that the problem is no longer there. The courts are able to competently sign out eviction and arrest warrants, deploy hundreds of troops to a valley 250 kilometers away from Guatemala City, arrive at the right spot to preside over the systematic destruction of hundreds of homes, and then fail to find any of the broken pieces when it is time for the aid trucks to arrive.

In response to the Otto Perez Molina administration’s pretext of peasant invisibility, the campesino movement has begun a new strategy of hyper-visibility in the Polochic.

Some of the 125 homes being built in 8 de Agosto. Photo by Stacey Irvin

On March 4thwe arrived in Ocho de Agosto, the most accessible and exposed of the 14 displaced communities. Where there had once been a corn field just between the highway and the river, we came upon an enormous construction project. Using some of their painstakingly-raised aid funds, the communities had decided to build 125 bamboo-pole temporary homes, fastened together with wire and staples and roofed with tin and tarps. Ten families from each of the 14 displaced communities will be invited to take the risk and the temporary comfort of the refugee camp, braving the nightly drive-bys of the plantation’s paramilitary security team in order to challenge the government’s stategy of dispersal and narrative of disappearance.

More well known to Guatemalans and, increasingly, to the world, is their second strategy. Since March 19th, a group of the evicted families, joined by other campesino activists from around the country, have been marching along the highway from Cobán to Guatemala City. The march is 215 kilometers and will last nine days, not only blocking road traffic but also bringing their cause to the similarly-impoverished communities of farmers and landless workers that lie along the route. The Long March is a strategy Guatemalan social movements use periodically, but never as iconically as when the miners of San Ildefonso Ixtahuacán went on strike in 1977 and walked 250 miles to Guatemala City, joined by hundreds of thousands of supporters who donated food, supplies, and marching feet along the way. That march was understood as a central part of the growing indigenous labor movement of the late 1970’s, proving that unity between rural communities and urban workers was possible. That unity would crescendo and then face brutal disarticulation during the dirty war of the early 1980’s.

But by uniting movements for land reform and against mining and other ‘megaprojects.’ the Polochic campesinos hope to reinvigorate the social alliance that was destroyed in the 1980’s, and their refusal of invisibility is already bearing some fruit. Solidarity statements from the Ch’orti’ indigenous organizations of Eastern Guatemala and UNSITRAGUA, a conglomeration of national labor unions, led the chorus of support, and thousands of supporters have joined the march as it prepares to enter Guatemala City on Tuesday morning.

For on-the-ground updates and photos of each day of the march, see Mark Romeril’s blog.

BYU and Queer Liberation »
« Bott, racism, and the role of a church

5 thoughts on “Campesinos Refusing To Disappear: Guatemala’s Polochic Valley One Year After the Evictions”