History is Made by the Many: A response to Margaret Young’s “Shall We Protest?”

Earlier today, Margaret Young published “Priesthood Restrictions – Shall We Protest?” on her blog on Patheos. She argues that the quiet agitation and private meetings with junior Mormon apostles of three African-descended Mormons throughout the 70’s were the main actions that led to the end of the ban on ordaining African-descended men. While Young appears to support the ordination of women, the piece has been widely shared online by both supporters and opponents of women’s ordination as a way of distancing themselves from the upcoming plans of Ordain Women activists to peacefully and straightforwardly request entry to the General Conference Priesthood Session in October. This is a response to Young’s article, and a request for clarification of some of her premises.

I appreciate that Margaret Young’s article “Shall We Protest?” keeps the discussion in the realm of sound strategy (how to effectively go about overturning a sexist priesthood ban that should never have existed) rather than dwelling on arguments about obedience and prophetic infallibility, as many opponents of the Ordain Women movement have done. Young’s approach keeps us grounded in concrete strategy, which is crucial. It’s possible to engage with strategy, it’s possible to disagree respectfully, and it’s a practical way to learn from movements of the past and adapt their strategies to our circumstances. 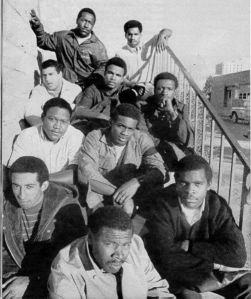 University of Wyoming football players who were expelled from the team for opposing racism at BYU in 1969, fueling a movement to expel BYU from the Western Area Conference with rallies of thousands in Arizona, Washington, and elsewhere

Here’s my problem with Young’s argument: it takes a highly constricted view of how social change occurs in general, and how the white supremacist priesthood ban ended, in particular. Nowhere does the article mention the massive national boycott of BYU athletics that was causing major financial and social impacts throughout that period. Or the importance of anti-racist organizing and decolonization movements (not just in the United States- in South Africa and Brazil, too, as well as almost every other country where the Mormon mission program was expanding at the time) that were directly challenging white control of resources at the church as well as at the national and international levels. It leaves out the years of protests and lawsuits, as well as quiet requests for meetings, planned by the Salt Lake NAACP to push the LDS Church not only to support ordination of black men but also to support equal housing, employment, and other civil rights legislation. Instead, Young’s piece only ever mentions three individuals (and a few of their friends) as having any impact on the change of the priesthood ban, making it seem like history is made by a few charismatic, well-behaved, people, single-handedly.

The overall implication of this article is the suggestion that 3 people, isolated from any base of support, with no power of numbers to counteract the power of historical intertia and intentional exclusion, can (and did) turn the tide of white supremacy. It suggests (against the long evidence of Civil Rights history) that organizing as communities makes us weaker rather than stronger. It suggests that speaking up publicly will hurt our cause.

So I’d like to ask Margaret Young to clarify a few things. I think the answers to these questions can help us think strategically about how to overturn the priesthood ban, which I think we both agree is a milestone towards the loving, generous, and equitable society we’d like to live in:

1) Why do you suggest that public statements and protest would hurt the overall goal of Women’s ordination? Is it that it would embolden the cause’s opponents? Would it anger the general authorities we are attempting to reach? Would it take up too much time that women should instead be using to plan meetings behind closed doors with the Quorum of the Twelve?

2) What relationship do you see between the broader context of anti-racist and anti-colonial organizing at the community level in the United States and internationally, and the eventual removal of the priesthood ban against African-descended men? Did it speed the process? Slow it down?

3) What impact do you see the thousands of African and African-descended church members and investigators having had on the overturning of the priesthood ban? You suggest that there was considerable ‘complications’ for the Church in South Africa, the Philippines, Brazil, and elsewhere- did the questions, resistance, insistence, agitation, or other activities of the multitude have any impact on the overturning of the priesthood ban, or do you believe that it can be entirely attributed to the actions of three charistmatic strategists and supportive members of the Quorum of the Twelve and First Presidency?

“In October 1971, the three black brethren were invited to attend the General Priesthood Session of General Conference. However, this did not go smoothly.

As Gene Orr approached the entryway to the priesthood meeting, the usher drew the red rope across the doorway and hooked it. Gene looked at it for a moment. He reported to me, “I did the only thing I could do—the right thing. I stepped over the rope.” He went directly up to Elder Packer on the stand and reported what had happened. Elder Packer talked to a security guard and had him send an intercom message to all ushers: “There will be two more.” Yes, three “Negroes” attended the Priesthood Session before 1978.” (excerpt from Young’s article)

Orr’s act of disobedience -stepping over the red rope- appears to have pushed Elder Packer to reaffirm a prior commitment and defend Brother Orr’s right to attend the meeting. What corollary are you suggesting for the Ordain Women movement- that women wait until invited by President Packer to attend priesthood session? Under what conditions do you anticipate this occurring?

Another way of asking this fourth question: if President Packer is not as receptive in 2013 as he was in 1971, and if he declines to meet with women who seek to overturn today’s priesthood ban as he apparently was willing to with African-descended men in 1971, what are women to do? This question is the question of the marginalized and the excluded, the question of those who are not able to crack through the glass ceiling and land on the schedules and agenda books of the Brethren. If those “who have the power to change things” are not amenable to meeting, what is your Plan B?

A third and final way of asking this question is: there are always those who will be selected as the ‘good activist’ and invited in to talk with decision-makers behind closed doors while others are excluded from the circle of fellowship and discussion. Perhaps the best-known example of this is the contemporary and posthumous attempts to divide-and-conquer Malcolm X and Martin Luther King, Jr, who were both shot for their visionary impatience before they saw the priesthood ban lifted, and who seemed to recognize the ultimate consilience of their movements despite their differences of strategy. This tendency to divide good, obedient activists from unruly, impatient activists and reward the former while excluding the latter was used in 1971, and it is used today. What should those people do who are excluded, whether because of their skin color, their gender, their working-class job, their sexual orientation, their shaky faith, or their geographical distance from the Utah center of power? We know that there are sure to be a few well-placed women who will at some point be invited into those closed-door discussions and will one day receive prophetic license to step over the red rope. Perhaps, as Young implies, some women already have. But those of us who will never receive those invitations exist too. What do you suggest we do? And if some of us choose to step over the rope without permission, will we let it divide us?

Postscript: In order to further clarify, I’m going to copy in here part of an exchange with the gracious Margaret Young, in which I explain more about why I found this response necessary:

How [we] construct the narrative, the story, of overturning the priesthood ban, in this article, makes it seem that the contributions of a small number of diplomatic activists who received personal invitations from apostles are the decisive contributions, whereas the contributions of many thousands of others who agitated for the same ends are nowhere to be seen. The reason that this is important is that most if not all of us are in the second group- we will never be in those private meetings, and so the history of those like us is not available to us, and replaced by someone else’s history. The strategic lessons we can draw about what to do today, lessons we might learn by examining the actions of those like us in the 1970’s, are replaced by the strategic lessons of others who we could never be. I will be the first to say that [Margaret Young’s] knowledge of the era and the variety of strategies to fight Mormon white supremacy is superior to mine, and I respect [her] depth of knowledge about it. I think [she] would be well positioned to write a history of the many and share it with us as well. Especially as we are talking about strategy.

…One of the purposes of this dialogue is to point out what was absent [in the original article], to bring in the alternative and additional pieces of the puzzle that were removed from or written out of the story. Maybe even, once those other pieces are put back on the table, to re-order the puzzle pieces and suggest we prioritize them differently.

I think something [Young] said [in our Facebook thread discussion] reinforces the different ways we are approaching the issue: [Young said of her article that] “my focus was on the three who became the faces of all blacks for those who met with them”. While well-selected spokespeople are a crucial strategic component of any social movement, it is also perhaps the most dangerous part of social change, since it tends to erase the contributions of those whose faces are not seen, in favor of a small number of people who are then credited with almost superhuman impact.

16 thoughts on “History is Made by the Many: A response to Margaret Young’s “Shall We Protest?””